In this episode I get random number and convert strings into more numbers. All this to build a guessing game, using the book "The Rust Programming Language" as a guide.

Warning to the reader: As always in this series, these are notes I take as I'm learning. They reflect my current understanding and may be incorrect!

In the previous episode I added use rand::Rng; to my code. Currently a warning appears on that line telling me this is an unused Import: 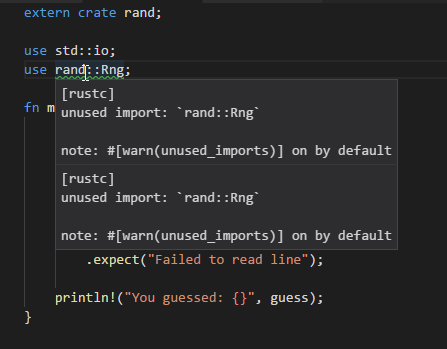 I like this, because it helps you keep only the stuff in the code that you actually need. Of course now it's just temporary, until we start generating random numbers.

Before I continues, I had the idea to do a cargo update to make sure my dependencies (only rand) were up to date. To my surprise, this added a reference in the Cargo.lock file pointing to the rand crate version 0.4.2.

The result is that .lock file now references two versions of rand, I'm not sure why and can't answer it right now.

I would like to find out how to uninstall specific version of crates and so on, so that'll be for another 25 minutes.

The tutorial continues with us adding the following lines of code to finally generate a random number:

Rust uses something called type inference. That means you don't have to specify the type (32-bit number, string, ...) when you declare a variable IF Rust can figure out what the type should be.

Take, for example, this line:

The secret_number variable will be of the type that is returned by the gen_range() function. In this case it's an u32, which is a 32-bit unsigned integer.

You can know this by figuring out what type gen_range() returns. But in Visual Code you can also hover the mouse of the variable and it will tell you the type:

In the tutorial, I read the following passage:

Next, we add another use line: use rand::Rng. The Rng trait defines methods that random number generators implement, and this trait must be in scope for us to use those methods. Chapter 10 will cover traits in detail.
Source: Guessing game tutorial: Generating a random number

Next, we call the gen_range method on the random number generator. This method is defined by the Rng trait that we brought into scope with the use rand::Rng statement.
Source: Guessing game tutorial: Generating a random number

From somewhere else I read the following definition on what a "trait" actually is:

A trait is a language feature that tells the Rust compiler about functionality a type must provide.
Source: The Rust Programming Language 1st Edition: Traits

From what I understand, it is very much like Interfaces: a type implements a "trait" so that you know the functions these types will provide. In this case, it is the specific random number generator thread_rnd that implements a trait that offers the gen_range() function.

In the book, it is adviced to find out what functionality a trait offers by checking out the crate's documentation.

For the rand crate, you can click on "documentation" while looking at the package on crate.io. Which will lead to this site: docs.rs > rand > 0.3.15 > traits

It mentions the available functions, one of which is thread_rng:

Clicking on ThreadRng shows the functionality offered by ThreadRng object. One of which is gen_range. But its definition is written in a way that is not so easy to understand for me at this moment:

I think there's a lot to unpack there, especially to understand what <T: PartialOrd + SampleRange> is about. So I will have to come back to that some other time.

The tutorial continues with the following code to actually check if the guess the user entered was equal, bigger or smaller than the random number:

Inuitively, one would expect an if statement or switch. But in Rust we have the cmp method - offered by all types that are comparable - of which the result is passed to a match statement.

cmp returns an enum value, much like the Result from previous episodes.

In this case, the match looks for the value Less, Greater or Equal. It doesn't do any more flexible patterns, but I'm sure that's possible. I remember this pattern matching being a highly desired feature for C# and it's now kind of in there.

But as said, in this case the patterns are pure values: three possible things can happen: You win, it's less or it's more.

How did we know cmp() would be available in the result of gen_range()? It returns an u32 (32-bit unsigned integer) and the documentation for that type lists that it implements the Ord trait.

The Ord trait itself offers the cmp() function:

The Ordering type is the Enum that we use in our match.

One thing we have to do in the guessing game is convert a string to a number.

It offers the following code:

The guess is a String, which offers a trim() function:

This method returns again a String which offers the parse() function:

The definition of this I don't yet fully grasp. But it does return a Result Enum again, just a different one it seems.

One interesting thing about the parse code is that we seem to "redeclare" or "rebind" the guess variable.

In Rust, you can do this: you replace the existing variable with a new one that has a different value. It's called "shadowing".

The reason for this is that you don't have to declare two variables, for example: guess_str and guess.

This is a feature I wasn't expecting and I haven't seen before.

The other interesting thing is let guess: u32. This says we are annotating which type guess should be(come).

The documentation for parse() says the following:

Because parse is so general, it can cause problems with type inference. As such, parse is one of the few times you'll see the syntax affectionately known as the 'turbofish': ::<>. This helps the inference algorithm understand specifically which type you're trying to parse into.
Source: String > Methods > parse

I guess I shouldn't feel too bad the declaration of parse was difficult to understand. The "turbofish" is not used a lot, according to the documentation, but it is the reason "we can tell it what type to parse into".

I would like to learn more about the turbofish later.

Just to see what it looks like, I made the parser produce an error:

A boatload of new concepts were encountered, with only a few lines of new code:

I noticed this is a way of learning that suits me personally: finding out things as I start using them instead of reading up on all the concepts without actually putting it in practice. And leaving some pieces temporarily "black boxes" until they shouldn't be anymore.

Also, it takes me about an hour to write a blogpost about my 25 Minutes of Rust.

I got some kind feedback on Twitter about this series, and that motivates me to continue doing these. Thank you!

In this post I describe how I modified my Ghost Template to include Disqus comments in my blog posts.

In this part I optimize the Interpreter to run code in 43 seconds instead of 1 minute 7 seconds.