I'm wondering how to combine an Akka.NET actor system with a WPF front-end.

The Actor Model provides a nice way to build concurrent systems. There are several implementations for .NET. Orleans and Akka.Net are the best known.

As an excercise, let's build a "thermostat" system.

I'll leave out some implementation details so we can focus on the integration.

The system will display both the current and the desired temperature to the user.

It'll have two buttons to increase and decrease the desired temperature.

In the background, the system should control the heating but we'll ignore that bit here. 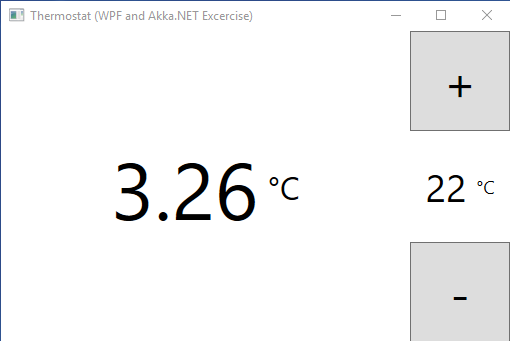 We'll create a basic WPF application with MVVM. The ViewModel will have a property for the current temperature and the target temperature.

The back-end should have a thermometer that takes measurements on a regular basis.

It should also keep track of the target temperature, set by the user.

The target temperature can change by two messages sent to the system:

As output, the system should emit:

This simple actor system can consist of two Actors:

The TemperatureSensor sends a message TemperatureMeasured to its Parent actor. This happens as a response to a TakeMeasurement message.

The TemperatureSensor sends the TakeMeasurement to itself on a fixed interval.

The Thermostat is in charge of creating a TemperatureSensor.

It's a "pub-sub" actor that should send to its subscribers the following messages:

With the UI and the actor system ready, we can start to make them talk with each other.

The code we start with is on github. If you want to try this yourself first, you could fork it. If not, just read on to see how I do it.

To support this, WPF should react to messages sent by the Actors. At the same time, WPF should be able to send messages to the Actor System, in some way.

To support this communication we could create a "Bridge". The Bridge will contain:

The Bridge can expose methods the ViewModel can call which pass messages to the Actor System. For example, a method IncreaseTargetTemperature.

The Bridge Actor calls functions exposed by the ViewModel. These will update the ViewModel's properties. The actor does this only while handling messages.

In short, we'll have two Interfaces. One implemented by the ViewModel, the other by the Bridge itself.

We can define these two interfaces:

The Bridge Actor references IThermostatView while the ViewModel implements it.

The ViewModel references IThermostatBridge while the Bridge implements it.

The views, as discussed above, are simple:

The Bridge Actor is small, just passing messages around. It does have two dependencies.

The bridge will implement the IThermostatBridge interface:

I already had a seperate class to create the Actor System. For the excercise, I'll create the system when the WPF app starts. But this might not be the ideal place.

In that class, there's a function CreateThermostatBridge which can create our Bridge. Here's the full ThermostatSystem class:

The code above creates the BridgeActor using the synchronized dispatcher.

This makes that actor run on the UI-thread, so calling methods on the ViewModel should be safe.

From the akka.net docs:

You may use this dispatcher to create actors that update UIs in a reactive manner. An application that displays real-time updates of stock prices may have a dedicated actor to update the UI controls directly for example.

Update April 27, 2016: The synchronized dispatcher is not required. All updates of the UI go through property changes on the ViewModel. The data-binding mechanism will take care of executing this on the UI thread. Read more in this blog post "Akka.NET Dispatchers and User Interface Thread Access" by Jason Roberts.

Finally we have everything to hook it all up in the ViewModel.

You can also see the implementation of the two commands the view can receive.

I do this in the constructor of the ViewModel for this excercise. In real life, I suppose dependency injection would be adviceable. But then the ViewModel would still need to assign itself to the Bridge afterwards.

Running the app gives me this WPF app that updates its view based on messages that occur in the Actor System.

Additionally, the view triggers changes to the system by sending it messages. It does this when it receives a command.

When you click a button in WPF, all it does is ask the bridge to increase the target temperature. The Actor System will then process that message. When it's done, the Actor System forwards a new message back to WPF so it can update the view.

This is all asynchronous, because of the actor system.

In the example, the current temperature only goes up. This is because I did not simulate an actual room that heats. I decided to just let the temperature increase at every measurement taken. Just to show the temperature is changing.

The example project is on github:

It's possible to loosely couple a WPF app with an Akka.NET Actor System. I used something I called a Bridge, but there must be a better name.

Something I don't like here is that the Bridge and Bridge Actor should be more generic. It mentions "Thermostat" everywhere.

Do you think this is a reasonable way to put a WPF front-end on an Akka.NET Actor System? Let me know in the comments, or on twitter or something.

In this post, I walk through the creation of a single Actor for Akka.NET. It will download files and report its progress to other Actors. I'll go through all details but might

I maintain a small tool to track my own activities through the day. For this, I wanted a feature to automatically log when I was "idle". So I'd know how long

At least it works.
—
Integrating WPF and Akka.NET
Share this