After looking up some things on .NET Standard, I realised I had some incorrect assumptions:

Targetting the highest version of .NET Standard, with a library, is not a good idea. There will be more platforms implementing the lower versions. Because they need to implement less of the API.

Each .NET Standard version adds more to the API. So the lowest .NET Version has the least API classes. For example, it lacks System.IO for file I/O.

If the goal is to have the library run on as many platforms as possible, it's best to target the lowest .NET Standard version that covers your needs.

I don't know why, but it felt like .NET Standard was something like the .NET Framework or .NET Core. And you build your library against that framework. That is not the case.

.NET Framework and .NET Core are platforms. The .NET Standard only defines what API's need to be implemented.

Without further reading (d'oh!) I decided to blow the dust of the FlacLibSharp code and jump in.

The main issue I'm expecting is figuring out how to build and publish a NuGet package that can be used cross-platform.

But that's for part 2. First, I need to make sure there's a .NET Standard version my library can be built against.

Back then, I thought if I wrote it for .NET Framework 2.0, the most amount of people would be able to use it. Today, .NET Framework 2.0 is really old, so I wouldn't mind changing it to a higher version, if needed.

In Visual Studio: Open the solution, in the properties of the project, I cannot see an option to choose a .NET Standard version.

What needs to happen is, I must create a new ".NET Standard" project. When I create the project I must also choose the .NET Framework.

I will create a new "Class Library (.NET Standard)" project, but use .NET Framework 4.6.2. Instead of copying the code, I will link the sources from the original .NET Framework 2.0 project, using Visual Studio.

Not surprisingly, things are breaking. I receive 43 errors, mostly in the following style:

In other words, I'm using a bunch of API's that are not supported.

Microsoft provides a Visual Studio extension to analyse the "portability" of a project: the .NET Portability Analyzer

Beware, it can only run on projects that compile. So I ran it on the old .NET 2.0 project.

The results are kind of surprising because it tells me my project is fully compatible with ".NET Standard":

What happened: I forgot to define what versions to check on. This can be done via Visual Studio > "Tools > Options > .NET Portability Analyser". 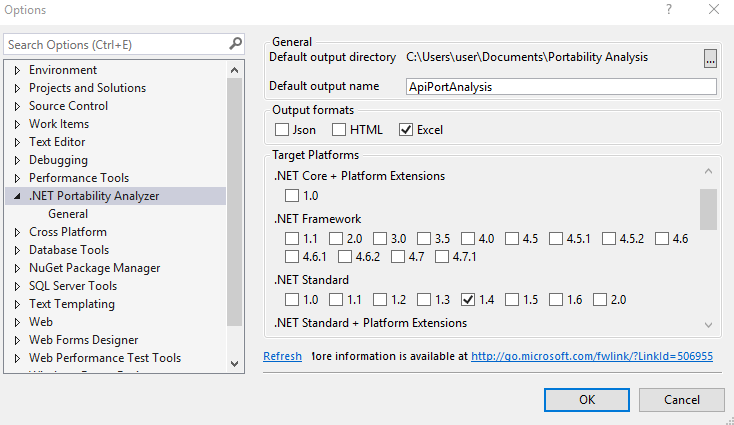 Here's a run down of the unsupported things I'm using, and what I did with them.

This is only supported from .NET Standard 1.6.

I use it in the following code of my Exceptions:

I honestly don't remember why this is there. But it's used to "set the SerializationInfo with information about the exception".

Basically it does some things to support Serialization of the exceptions with additional details. I'm going to remove this in the hopes of supporting .NET Core < 2.0. And also, I don't think this adds a lot of value.

I decided to remove GetObjectData overrides.

Good news, this increased support to 97 %. Bad news, if anyone is using that feature they will be unhappy. But really they can still custom serialize it if needed.

This is supported in .NET Standard "2.0+". Also, when looking at the .NET Standard API reference for 2.0, the following important remark is there:

The Close method for Stream is only supported as of .NET Standard 2.0. Advice by the analyzer is to use the Dispose instead.

This brings me up to code 100% supported on .NET Standard 1.4. This means the code will run - for sure - on the following platforms:

Important: Just because the code uses API's supported by these platforms, doesn't mean the code will run without issues. For example maybe my library does some file access that is not allowed on some platforms. In that case the supported API will throw an error.

It could also be that my code runs on older versions of these platforms. So to know for sure, I can run the analyser for all versions of all platforms. To do that analysis, the output must be HTML instead of Excel because Excel only supports 15 targets in the analysis, for some reason.

It looks like currently the library uses API's supported on these platforms:

It does not work on ANY version of Silverlight and Windows Phone.

I already knew it worked on .NET Framework 2.0.

I could probably get it to work on Silverlight, but only if I want to ... I don't.

Having fixed these compatibility issues, I would've expected my .NET Standard project to build. Yet I still receive some build errors.

Some of these errors complain about my "using" directives referring the assemblies that don't exist in .NET Standard 1.3. For example using System.Runtime.Serialization.

For "Serializable", I'm using that attribute on the custom Exceptions:

However, I'm not actually using "Serializable" but "SerializableAttribute". And this is only introduced with .NET Standard 2.0.

This seems to show the Compatibility Analyser isn't perfect.

Since I still want to support .NET Standard 1.3, I will stop using the Serializable attribute on my exception completely.

If you build a .NET library, you want to target the lowest version of .NET Standard possible.

You can use the Portability Analyser Visual Studio extension to know what version your code needs. But it's not perfect so also check for build errors.

To target a lower version of .NET Standard you may need to make compromises.

In my case, the most suitable version was .NET Standard 1.3. Mostly because of its support for System.IO.

In part 2, I look at creating a NuGet package for the library that can be used by all platforms that support .NET Standard 1.3.

In Part 1 I talked about how I got from a .NET Framework 2.0 project to a .NET Standard 1.3 project. In this post, I'll write down what I did to

I needed a quick way to capture my screen and save it to a gif file. Found Screen to Gif is easy to use. If you have chocolatey installed it's easy to install

At least it works.
—
Porting FlacLibSharp to .NET Standard (Part 1)
Share this