I maintain a library with a modest number of users (at least two!) that can read FLAC metadata, in .NET.

Recently I ported it to .NET Standard and published it on NuGet.

Porting a .NET Framework 2.0 library to .NET Standard is one thing. It doesn't mean it will automatically run on all platforms that support .NET Standard.

I can't test it on all those platforms, since I do not have the hardware for it.

But I CAN test it on Linux.

For this, I will need to:

My tests show that FlacLibSharp does run on .NET Core for Linux. I didn't have to make changes to the library itself to make it run on Linux.

I did run into some problems:

See the results on Github: https://github.com/AaronLenoir/flaclibsharp

I set up a clean VM with Ubuntu, with updates installed, for these tests.

Because Ubuntu is given great support everywhere, there is a dedicate guide from Microsoft on how to deploy it to Ubuntu. I won't duplicate the steps here ...

The only detail not mentioned is that you need curl. So:

Following the guide went smoothly and resulted in me running Hello World in .NET Core: 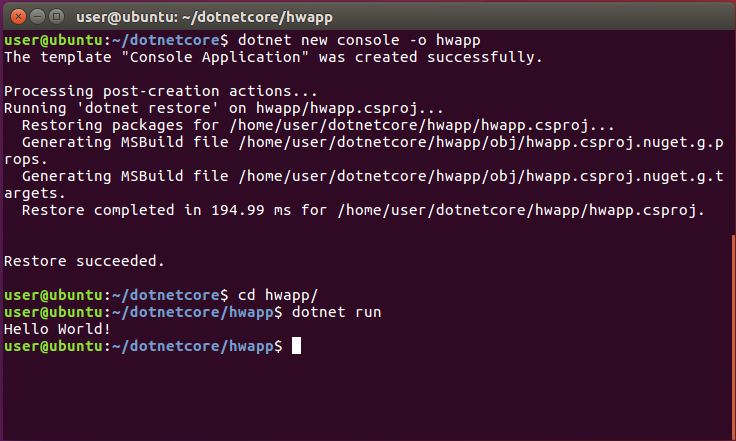 My first thought was to just change the target platform of my unit test project to .NET Core 2, but that is not possible for such a project. Because it is using an older csproj format.

But once I have the tests in .NET Core, I won't need this old test project anymore ... (I think)

I will call it "FlacLibSharp.Test.Core".

Rebuilding it will shows the "hello world" test in the "Test Explorer" of Visual Studio. So we are good to go.

First of all, the project depends on the FlacLibSharp project itself. Luckily, .NET Core still allows us to reference another project in the solution. So I can add FlacLibSharp directly.

Next, I will copy all files (both test files and source code) from the old .NET Framework test project. I copy because the .NET Core test project will be replacing the old project.

A thing I ran into was a test that would get and set access rights on a test file. This is a test to check whether a Save on a Flac file would clear the original file's access rights. This was a bug reported to me via github.

I won't be able to solve this easily, so for now I will take the following approach:

In will delete the "FileAccessRightTests" from .Core but leave it for .Windows.

The Windows tests can then do stuff that is specific to Windows. I can then later figure out how to port that test in a cross platform manner. But given the big differences in ACL between platforms, that might be hard.

Everything else compiled fine.

Running the tests on Windows

Running the tests on Windows, I expect little problems and sure enough all tests run fine.

Now I can safely delete all tests from the old FlacLibSharp.Tests project, except the FileAccessRight tests.

Now, on my dotnetstandard branch I can push this to github and via that way hopefully get the project on Linux.

I clone the project from github into a local folder:

To jump straight in I thought to just try the command dotnet test and see what happens. But that gave me a lot of red text which I won't show here. If you are interested it is here: https://gist.github.com/AaronLenoir/d8249fab23cc100587464a35dfada16f

No great success, I guess I should first try to build FlacLibSharp itself. But this produces an error too:

During my porting I had added two target platforms to FlacLibSharp, so that my NuGet package would contain a dll for .NET Standard 1.3 but also for .NET Framework 2.0:

It looks like that decision has come back to bite me.

If I remove net20 from the TargetFrameworks the build succeeds:

In my previous posts, I concluded I did not require two separate projects to target both .NET Framework 2.0 and .NET Core.

I still do not want to do this, because I want them both in the same NuGet package. But I also want to be able to build and test the library on .NET Core specifically. But it's not possible to build projects that also target .NET Framework 2.0.

After the tests run successful I will come back to this issue, with a solution.

Ignoring the above issues for now, I want to see if my FlacLibSharp built on Linux can pass the tests.

This results in a successful build.

This results in a much less hopeful report:

The problem in all tests seems to be that the tests files aren't found in the output directory:

But actually, the files are there. The problem lies in the way I build up the path in my tests:

The backslash is fine on Windows but Linux doesn't know what to do with them.

The correct way to build these paths is using Path.Combine:

So that's a pretty painful replace through all my tests. But after this change I receive the encouraging message:

But we target the two platforms so that the NuGet package can be used by older .NET Framework applications and by applications on a framework compatible with .NET Standard 1.3.

Since I still want to support running tests on Linux, I have used the following approach:

This allows us to run the tests on linux (but not to make a build for publishing): 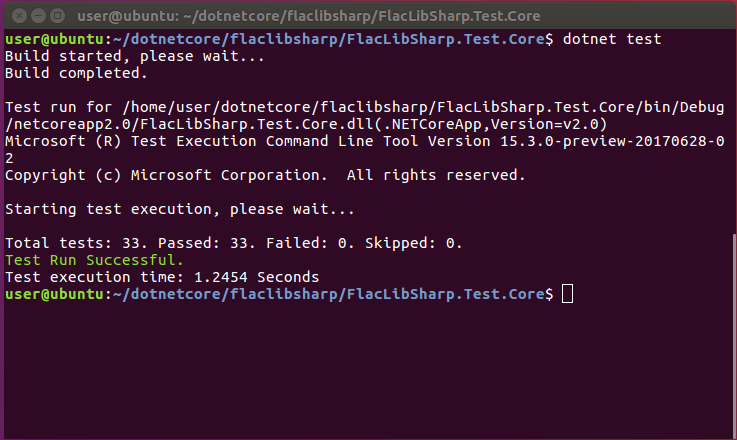 My tests show that FlacLibSharp does run on .NET Core for Linux. I didn't have to make changes to the library itself to make it run on Linux.

I did run into some problems:

See the results on Github: https://github.com/AaronLenoir/flaclibsharp

Now that I can build and test my things on .NET Core, I'm hoping to revisit integrating Travis CI on my Github repo for automated testing.

Feel free to share how you would deal with this.

After porting FlacLibSharp to .NET Standard, publishing it to NuGet and building it on Linux. I felt I needed to add Travis CI continuous builds to my Github repo. I thought that this

As an excercise I wanted to make a bf interpreter in .NET Core. I wanted to see how fast I could make it go. Introduction The language we'll be interpreting is very small.

At least it works.
—
Building and Testing a .NET Standard library on Linux
Share this