I have some files on my computer that I do not want to loose. The most important ones are - of course - pictures of loved ones. But also some other things I want to get back if my hard-drive crashes or gets erased by ransomware.

I used to use CrashPlan to back up my files to an external service. But CrashPlan decided to focus on business customers only. So all other users were forced to look elsewhere for a backup solution.

A good time to revise the backup strategy.

Given a device that stores valuable data. You want to store that data:

In my old strategy I only did the first and the last point. Now I added a seperate backup disk too.

The first one is reasonably straight-forward. You plug in the mobile devices using the USB cable and copy paste the files to the laptop's disk.

The other two may require some more detail.

For this, now, I am using a Windows 10 feature called "File History". It's not perfect but it's easy to use and comes with Windows 10.

Not perfect, but better than doing an occasional copy paste manually.

I'll jump to the draw-backs first:

The advantages, over a manual copy paste, are: 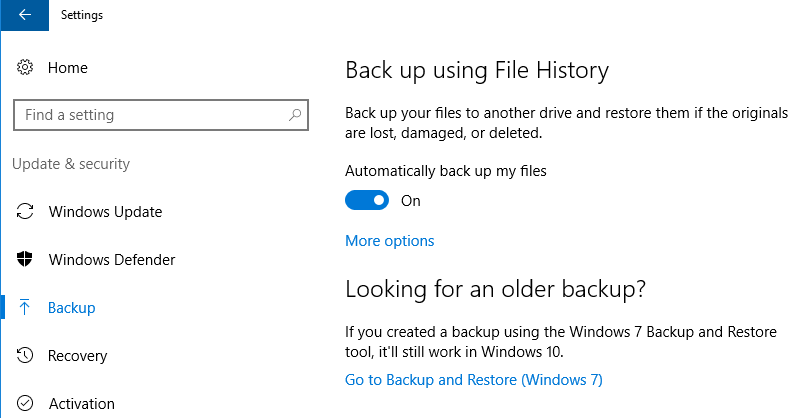 To go around the problems of backing up files that are in use, I try to make sure I only plug in the backup disk when I'm doing nothing else on the computer.

With CrashPlan gone, it was time to look at alternatives. With $50 / year for the CrashPlan subscription, I was hoping to find a slightly cheaper alternative.

After looking at some advice on the Internet, two options seemed to be recommended a lot:

There were a few things holding me back though:

If I put a private key on my backups it's because I want the only place where they are encrypted and decrypted to be my local machine. Not on some server somewhere.

Arq + B2 Storage was more attractive:

Setting up Arq + B2 Storage

Go to the website, sign up. The only way to pay is to enter your credit card information. This is something I don't like too much, but was willing to compromise on. I much prefer a pre-paid credit system.

I had an interesting issue while signing up. Creating a new account gave me a vague error: "Please try again. If the problem persists, please contact tech support."

After chatting to tech support, who were really responsive, it turned out the error was caused because I already had a backblaze account. Normally, a website shouldn't tell you whether or not a given e-mail address already has an account or not. It should pretend sign up worked and send a confirmation e-mail to the e-mail address.

You can skip the sign up and just start the trial.

Incidentally, the upload crossed the upload Cap of my Internet provider, so I had to change plans there.

Subsequent "lean" backups take about three minutes, if no activity has happened. I assume if large files are changed it'll take longer.

"Lean" backups make a copy every hour for the past 24 hours, keep one for each day for 30 days, and one for each month after that. If your storage budget allows it. They don't seem to be taking up a significant amount of space.

These types of point-in-time backups are important: if you are hit with ransomware, you don't want the locked files to overwrite the original files.

I had some errors with a few files that were inaccesible, even though the service is running under SYSTEM. But apart from that, everything was running smoothly after the initial backup.

When running both crashplan and Arq idle, arq uses 115 MB of RAM. CrashPlan uses 600 MB of RAM. When backing up some newly added pictures CrashPlan runs at about 600 MB and Arq at 380 MB. So that is a bonus too:

It looks a little slower though.

After three days my storage costs are currently: $0.05. So that's $0.50 after 30 days. I will see if it has a few months backupped how much space I need, and adjust the budget accordingly.

I may consider changing my local backup from Windows 10 File History to Arq.

On the one hand, I paid for Arq so I might as well use it.

But on the other hand, it might not be a bad idea to have two backups made with different software.

Arq backup seems like a valid alternative to Crashplan, with some added bonusses.

Only the setup is a bit more involved, since you have to sign up for storage seperatly. But once set up, it's as easy as Crashplan.

Ever since the .NET source code has been available, I roam through it now and then to learn some things. I'm assuming the people who create .NET Framework and .NET Core are experts

For a long time, the concept of "bitcoin mining" was very mysterious to me. People would have their devices "compute" some things and receive some "Bitcoin" as

At least it works.
—
Replacing CrashPlan for Backups
Share this